“An excessively crazy and cute side scrolling shooter that anyone can pick up and enjoy.”

While poking around the Playstation Store’s Minis section for something to play on my PSP, I happened across a curious sounding title. Flying Hamster. I read the description and realized that the game was side scrolling shooter, like Gradius or R-Type. Considering the fact that the player assumed the role of a hamster, I just had to check the game out to see what it was like. Well, after playing the game quite frequently on my PSP, I can say that it’s a pretty fantastic shooter.

In Flying Hamster, you play as a hamster who is constantly trying to rescue his girlfriend hamster from the clutches of evil. Just before the start of each level, the protagonist’s girlfriend is captured by the boss of the next level. It’s all done in a really adorably cartoon-like anime style that you can’t help but chuckle over. The game’s cuteness is so over the top that it is absurd. That does not mean that the game is just a cute little romp for kiddies, no. While the presentation of the game may be very sugar coated, there is a very dark sense of humour in this game. In the first level, cows that use their udders as machine guns attack the player, and in the following level that is set in the desert, penguins with parasols try to shoot down the player with pistols. Yes, you read that right… Penguins in the desert.

The joy of Flying Hamster is that it makes practically no sense at all. The game is just mindless fun, and it plays like something straight out of 1990. If the graphics were a little lower quality, this game could easily pass as something straight out of the Super Nintendo’s library. That is in no way a bad thing, since the Super Nintendo had a healthy amount of fun shooters. Flying Hamster is perhaps even more enjoyable than any shooter on the SNES. The game’s insane levels of quirkiness help it along quite a lot, but the gameplay is also extremely solid. Controls are very fluid and precise, so missing your targets or failing to avoid incoming projectiles will always be your own fault.

Flying Hamster is divided up into roughly half a dozen stages which are all themed. Throughout the stages, the player will have to dodge all sorts of zig-zagging enemies and projectiles while shooting down obstacles and stage bosses. The bosses are pretty fun in this game and definitely make you smile. The bosses start out moderately easy with a giant owl that shoots homing lasers from it’s eyes, but the game will quickly ramp up the difficulty slightly, though the game never becomes as difficult as other games in the genre. I think most of the reason for this game being fairly easy is the fact that you are able to take three hits before dying instead of just one, and the powerups are pretty darn powerful.

My two favourite power-ups are the beer and the fire. The beer will make the player squirt little dabs of beer, but when it is charged up, prepare for projectile vomit-like streams of beer! It’s a prett gross (but hilarious sight) and, fortunately, it’s strong as hell too. The fire is in the same boat as the beer. If you fire it without charging it, you’ll just shoot off weak little shots, but when the fire attack is charged, our little hamster spews a steady stream of fire that obliterates everything in it’s way! There are many other power-ups to collect, such as homing bees and boomerange bananas. All of them are pretty silly and should put a smirk on your face.

The presentation is what really sells this game, though. The graphics are ridiculously cute (just look at the screenshots in the review) and the music is so light-hearted and fun. It really is impossible not to be captivated by this charming little game. I had a recent play session of the game where I hooked my PSP up to my TV and everyone in the room got a kick out of all of the hilarious and silly things happening on the screen.

I honestly cannot give this game a low score or not recommend it to anyone. It’s such a lot of fun to play, and the crazy presentation of the game even appeals to people who don’t like side scrolling shooters. For only a few bucks on the Playstation Store (as well as on the iPhone App Store), you really can’t go wrong with having this game in the palm of your hands.

“A game that finally lets us fulfill our boyhood fantasies of being fifty feet tall and capable of destroying farming villages.”

WackyLands Boss is a game with an extremely simple premise. In this quirky little game, you are supposed to play as the bad guy. You see, you get to control a character known as “The Boss” which is a essentially a giant ogre that is capable of tearing through the ranks of the “heroes” who come at your boss in waves upon waves in an effort to bring it down.

The gameplay is moderately enjoyable, hovering somewhere around the average mark. You move your boss left and right through stages, using various light and heavy attacks along with a few special attacks that you can perform when your rage bar fills up, which does so whenever you take damage.

I found WackyLands Boss to be fairly fun to play, because it was interesting to be able to play as a screen filling giant for once. I wasn’t really able to connect with the game’s supposed story however, which just involves destroying the countryside merely because you’re one bad dude. The story indicates that heroes are out to stop you, but instead you will just find lots and lots of identical looking characters with identical sound effects rushing at you, and none of them are any bit difficult to dispatch. Even the bosses are frighteningly easy. 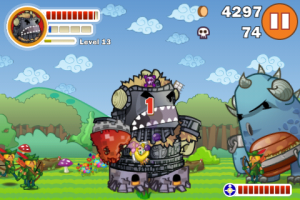 The sound really isn’t worth mentioning a whole lot. All sound effects are incredibly generic, and the cries and screams from the heroes you kill or set on fire can be simply annoying at times. The music is pretty low key and just feels like background noise most of the time. The music doesn’t sound bad or anything, it just isn’t immersive at all.

The graphics are without a doubt the best part of this game. Your “boss” is more often than not very goofy looking or even downright cute depending on how you customize it. In between levels, you are able to customize it’s face or buy clothes and weapons for it. There are lots of hilarious combinations that you can make with the eyes and mouth, and I got quite a kick out of making my guy look absolutely thrilled and happy as he squashed knights and set archers on fire.

WackyLands Boss is not a revolutionary game at all, but it has some interesting ideas that aren’t implemented nearly often enough in games these days. The gameplay is pretty decent and certainly has some charm, though it can get repetitive very quickly and can suffer from being far too easy of a game.